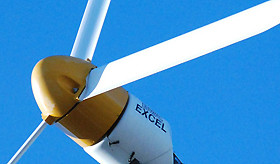 Both an exhibit and an energy source, the Da Vinci Science Center wind turbine outside is a BWC Excel-S model produced by Bergey Windpower Company of Norman, Okla. It has a rated power of 10kw and a rotor diameter of 20 feet. Its tower is a 90-foot-tall, tapered, tubular monopole with a galvanized finish. The machine’s total height is 102 feet.

Why It is This Height

The smooth flow of wind over land is interrupted by obstructions and variations that create wind shear and turbulence. The term wind shear describes the fact that wind closer to the ground is slowed by friction and obstacles. Turbulence is essentially rough air caused by the wind passing over trees, buildings, and land features. These factors, however, do not affect wind higher off the ground. Scientists have determined that the turbine should be at least this height to create the desired amount of power efficiently.

How it Produces Energy

To understand how the Da Vinci Science Center wind turbine produces energy, one must first understand that wind, or the motion of air, is a form of solar energy produced by the uneven heating of the Earth’s surface. The turbine consists of a rotor, a generator, a mainframe, and a tail. The rotor essentially captures the kinetic energy of the wind and converts it to rotary motion that drives the generator. The generator pumps useful energy down through the tower and into the building through underground wiring. The energy is then used immediately in the place of energy from traditional sources.

Why it is Called a Turbine

By definition, a “turbine” is a rotor that is turned by a moving fluid. Wind is the motion of air, which is considered by scientists to be a fluid. As is the case with many scientific terms, the term “fluid” has a particular definition. Fluids essentially are defined as materials that can flow, including liquids and gasses. Therefore, the machine outside the Da Vinci Science Center building is identified correctly as a wind turbine.

How Much Energy it Produces

The Da Vinci Science Center wind turbine produces approximately 6,500 kilowatt hours a year, or about 1.3 percent of the building’s energy.