Did you know as a young person that you wanted to be an attorney?

I grew up outside of Washington DC with parents who both had jobs in government. I graduated with English and Art History degrees, not uncommon for law school students. Plus, a law degree in DC can help you do work well beyond the standard practice of law.  I knew I wanted to advocate for children in some way.  My husband was hired at Lehigh University, which brought us to the area; we left DC three weeks before 9/11, which I still find surreal.  I found a job clerking for a great small civil-rights law firm here and passed the Pennsylvania Bar in 2002.

How did your journey change over the years and what brought you to the Science Center?

I really believed in the work I was doing with the firm, but I discovered that the actual practice of law was like a shoe on the wrong foot for me; I could walk okay, but it was never comfortable.  We were also representing some kids who clearly needed intervention, but by the time they were involved with us, a lot of damage was already done.  I wanted to do something before they became involved in the court system.

I also had ambitions of being a writer, so my very patient husband supported me taking some time away from the law to write and figure out what I was going to do.  I saw a part-time job at Da Vinci (then the Discovery Center) advertised and thought, that sounds fun to make a little money on the side.  Little did I know that I was going to finally figure out what I wanted to be when I grew up!

What is your favorite part of your work at the Science Center?

It’s a tie between learning new things myself and getting kids excited about science, exploration, discovery, and learning.  Even if you have no interest in a science career, science helps you understand the world around you, and it has really reframed how I think about things over the years.

I also love teaching something like patent law to kids and when I ask, ‘are you having fun with this?’, hearing an excited ‘YES!’  I like that I can marry my legal background to my love for creativity and making things.  Creating programs is way better than writing a novel!

What advice would you give a young person who is deciding what career path to follow?

Take whatever opportunities come your way and realize that what you have planned may not be how it works out…and often that unexpected opportunity/change of plans can make things even better than you thought.  See where the current takes you! 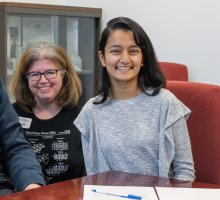 Kate (center) with Reva Gandhi, an eighth-grader at Springhouse Middle School in Allentown, Pa., as the winner of the 2019 Da Vinci Science Center Inventor’s Lab Most Patentable Idea Award.

Tickets for BODY WORLDS RX are on sale NOW! Don't