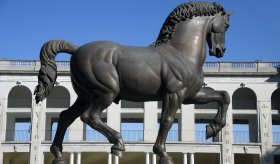 ALLENTOWN, Pa. August 3, 2017 — From Sunday, August 6 through Wednesday, August 9, the Society of Fellows at the Aspen Institute in Aspen, Colo. will be hosting an event to celebrate the life and creative genius of Leonardo da Vinci. The event, aptly named “Leonardo da Vinci: A Celebration of Wonder, Imagination, and the Creative Power of Curiosity”, will be attended by Lin Erickson, Executive Director and CEO of the Da Vinci Science Center, along with the Center’s prized three-foot-tall replica of Leonardo’s Horse.

While on the Aspen Institute campus, Erickson has been invited to present the story behind Leonardo’s vision for “Il Cavallo”, which was never realized during his lifetime but came to life five hundred years later through the dream of the late Charles C. Dent of Allentown, Pa. and the organization he founded, Leonardo da Vinci’s Horse, Inc. (LDVHI).  Erickson’s presentation will examine the artistic, technological, and historical significance of Leonardo da Vinci’s Horse and feature the creative process employed by Dent and LDVHI to make the Horse a reality.

LDVHI unveiled the completed statue on September 10, 1999 in Milan, Italy. Its completion pays homage to the creative genius of Leonardo the artist and the curiosity of Charles the dreamer. The statue stands today as a symbol of goodwill between the American people and the people of Italy.  The Da Vinci Science Center took shape in July 2003 with the merger of the Discovery Center of Science and LDVHI. The Center owns the intellectual and licensing rights for the Leonardo’s Horse sculpture.

Additional Leonardo’s Horse replicas stand in Vinci, Italy; at the Frederik Meijer Gardens in Grand Rapids, Mich.; at The Baum School of Art in Allentown, Pa.; outside of the Downtown Sheraton Association building in Sheridan, Wyo.; and at the Da Vinci Science Center. The replica in transit to the Aspen Institute is the same statue normally on display at the Center as part of an exhibit relaying the story of Leonardo da Vinci’s Horse and will return following the conference.

Today's the day! Playing with Light is now open for a limited time! Have you reserved your tickets yet? Learn more and get tickets at bit.ly/3klgcf0. ... See MoreSee Less

Congratulations to Allison Dolan, Woman to Watch in the Lehigh Valley. I am so proud to recognize her at this event! ... See MoreSee Less

May the 4th be with you! Check out this awesome event from our friends at the Allentown Symphony Orchestra. ... See MoreSee Less

Step out of the dark and into the fascinating world of light during Lights, Color, Imagination Summer Camp! Campers will experiment with light’s effect on optics and illusions and have fun with the physics of light as they get an up-close and personal perspective on circuitry, shadow, and the electromagnetic spectrum. Learn more and register at bit.ly/3LPP03Z. ... See MoreSee Less

We would like to send a HUGE thank you to the volunteers from Amazon who helped to lay mulch and clean up our landscaping recently as part of the Volunteer Center's Volunteer Challenge. ... See MoreSee Less

We were so happy to celebrate this year's Vitruvian Volunteer of the Year, AirPRO (Air Products Retirees). The AirPRO volunteers have helped us to install and tear down countless exhibits, as well as other projects. We are so grateful to them for their support through the years. ... See MoreSee Less

Installation has begun for Playing with Light, which opens this Friday, May 6! Have you reserved your tickets yet? Learn more at bit.ly/3klgcf0. ... See MoreSee Less

Last night, we celebrated some outstanding students and educators during our STEAM Awards Celebration. These honorees have a proven passion for science, technology, engineering, art, and math and are dedicated to inspiring curiosity both in and out of the classroom. Congratulations to this year's exceptional award winners! Learn more about them at bit.ly/3rYTNIr. ... See MoreSee Less

Every day is earth day! Come celebrate today with the Lehigh Valley Section of the American Chemical Society! They are at Da Vinci Science Center until 2pm with some cool activities! ... See MoreSee Less

Today we broke ground on a brand new science center in the heart of downtown Allentown. We celebrated this monumental milestone with Governor Tom Wolf, Congresswoman Susan Wild, Senator Pat Browne, and other elected officials, community leaders, and students from Allentown School District. We are so grateful to all who have supported this project and who share our commitment to bringing science to life and lives to science! Da Vinci Science Center at PPL Pavilion opens in 2024. Learn more at bit.ly/3KTEVTl. ... See MoreSee Less

Join us and our friends from the Lehigh Valley Amateur Astronomical Society (LVAAS) for a solar party on Saturday, May 14! Witness the Sun’s stunning features in incredible detail using solar telescopes. Learn more at bit.ly/37CdezI. ... See MoreSee Less

Computers, and tablets, and robots, oh my! Campers in our Tech Trailblazers single-day camp will explore the evolving world of technology. Learn more and register at bit.ly/3uWmS87. ... See MoreSee Less

We are thrilled to announce that Lehigh Valley Health Network is the title sponsor of the LVHN My Body experience in the new Da Vinci Science Center at PPL Pavilion on Eighth and Hamilton streets in downtown Allentown, coming in 2024. See updated renderings and learn more at bit.ly/3KTEVTl. ... See MoreSee Less

Join us as we introduce the title sponsor of the My Body experience in the new Da Vinci Science Center at PPL Pavilion on 8th & Hamilton Streets, downtown Allentown ... See MoreSee Less

Get the Free Newsletter