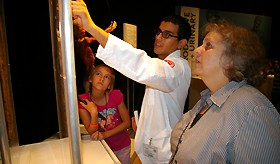 The Da Vinci Science Center is extending the appearance of the world-famous Bodies Revealed exhibition through Monday, Feb. 18, 2013, and offering extended hours in response to its record-breaking popularity.

Bodies Revealed is the first of two blockbuster visitor experiences presented by St. Luke’s University Health Network as part of the Da Vinci Science Center’s Year of the Human Body theme. Attracting more than 15 million visitors in locations across the United States and around the world, Bodies Revealed takes visitors on a mesmerizing three-dimensional tour of the human body with 11 full anatomical specimens and 180 additional pieces. It offers an up-close look inside the body’s major systems. Bodies Revealed is produced by Premier Exhibitions of Atlanta, Ga. Bodies Revealed has helped the Da Vinci Science Center break its single-day paid visitation record multiple times in recent weeks.

“The appearance of Bodies Revealed has made a phenomenal impact that the Da Vinci Science Center will enjoy well after its conclusion,” said Troy A. Thrash, the Center’s Executive Director and CEO. “While Bodies Revealed has attracted a larger and more diverse group of visitors, those visitors have been impressed by our rich tapestry of additional experiences and will remain engaged with us. Bodies Revealed has delivered the game-changing momentum that we have anticipated.”

Presented by the St. Luke’s University Health Network, the Year of the Human Body is an effort to inspire interest and participation in medical careers. The initiative includes the appearances of the blockbuster Bodies Revealed and Grossology exhibitions, a public mini-medical school simulation produced by Temple/St. Luke’s regional medical school, and several additional public programs. The Year of the Human Body also is supported by Capital BlueCross, Daiichi Sankyo, and Discover Lehigh Valley.