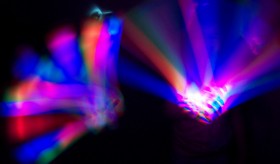 The colorful connection of science and the arts will come alive during the Da Vinci Science Center’s Science Works celebration May 5-6, 2012, presented by Air Products.

Science Works will be highlighted by an exclusive public presentation on visual perception by Jeff Lieberman, host of the former Discovery Channel series “Time Warp,” on Saturday, May 5, 2012, from 3-4:30 p.m. Lieberman is a phenomenal photographer who produces mind-bending images, a roboticist at M.I.T., and musician who has played Carnegie Hall in New York, N.Y.

Science Works 2012 also will feature unique experiences for Da Vinci Science Center visitors, colored by Crayola and Dan’s Camera City. These experiences will include a Dan’s Camera Color Darkroom from which kids can take home a free photo strip, a Cedar Crest College Create Cart of craft activities, Baum School of Art demonstrations on drawing and sculpting, and presentations on Leonardo da Vinci’s art and science work by Peter C. Dent, Chairman of the former Leonardo da Vinci’s Horse organization and former Da Vinci Science Center Chairman. Science Works visitor experiences will be included with Center admission and will take place on Saturday, May 5, 2012, from 11 a.m.-2 p.m.; and on Sunday, May 6, 2012, from 1-4 p.m.

Jeff Lieberman’s Science Works Featured Presentation is a specially-ticketed event at Alumnae Hall on the campus of Cedar Crest College.