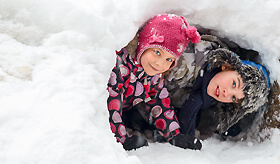 DSC Visitors to Explore Ends of Earth with Polar Adventures

Da Vinci Science Center visitors will explore the ends of the Earth this holiday season as the Center hosts eight days of Polar Science Adventures.

Polar Science Adventures will include two rooms of new activities for all ages and a series of stage shows featuring guests from Arctic Paws Dog Sled Tours, Pocono Manor, Pa.; Lehigh Valley Zoo, Schnecksville, Pa.; and the New Jersey Academy for Aquatic Sciences, Camden, N.J. The programs and activities will give visitors a deeper understanding of how different daily life is in polar regions and how wildlife can survive and thrive in those climates.

The Da Vinci Science Center is extending its annual slate of winter holiday activities to compliment its showing of the world-famous Bodies Revealed exhibition, presented locally by St. Luke’s University Health Network as part of the Center’s Year of the Human Body. Bodies Revealed helped the Center increase its visitor participation by more than double during the recent four-day Thanksgiving weekend.

Bodies Revealed is a production of Premier Exhibitions of Atlanta, Ga. Tickets can be purchased in advance at davincisciencecenter.org/tickets.