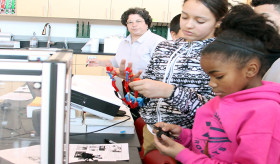 More than 700 female middle school, high school, and college students explored careers in science and engineering and were inspired by successful female role models during the Da Vinci Science Center’s two Women in Science and Engineering (WISE) events this week.


The 2016 WISE Forum Thursday night at the Renaissance Allentown Hotel included a networking reception and dinner for female high school and college students and a national panel of highly accomplished female STEM leaders – including the recently-retired Chairman and CEO for the DuPont company; an Aerospace Engineer for the NASA Goddard Space Flight Center; and active and retired executives from IBM, Merck, Daiichi Sankyo, and the United States Agency for International Development (USAID).

The dinner was followed by a public discussion program during which panelists shared stories about their careers, described the paths they took to realize them, provided advice for young women, and encouraged the students to follow in their footsteps.

Both events were presented as part of the Da Vinci Science Center Women in Science and Engineering (WISE) initiative to support current female professionals in the STEM fields – science, technology, engineering, and mathematics – and to encourage female students to pursue STEM careers. The WISE Academy and WISE Forum programs were presented by Daiichi Sankyo. St. Luke’s University Health Network and B. Braun are Founding Partners of the Center’s WISE Advisory Council.

The Da Vinci Science Center created the WISE initiative and holds WISE events for students as a response to national trends – trends reflected regionally – in which women comprise approximately 48 percent of the American workforce but only 24 percent of STEM professionals are female, according to the U.S. Department of Commerce.

“We were proud as participants to support our future legacy of young ladies who will change the world,” Aprille Ericsson said. “It was wonderful to see so many young ladies out on a school night for the entire event. The event’s popularity is a testament to its importance and quality of its message. I believe it was received loud and clear.”

Efforts led by the Da Vinci Science Center produced a Women in Science Week of visitor activities in 2011 and the Lehigh Valley area’s first formal Women in Science event in Sept. 2014. The Center formed its WISE Advisory Council in the fall of 2015 to organize its efforts and to engage female STEM professionals on a regular basis.