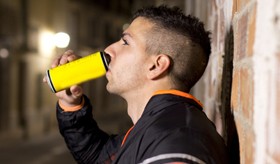 Like most teens, Shoshanna Goldin of Whitehall, Pa., is aware of the trends that come and go.

When she saw her classmates and friends at Moravian Academy, Bethlehem, Pa., starting to scarf down popular energy drinks in massive quantities, however, she decided to look into the trend instead of following it.

What Shoshanna learned alarmed her.

Her study – which she titled Energy Epidemic: Teen Perception and Consumption of Energy Drinks – found that teenagers were unaware of the amount of stimulant in, and the risks associated with the popular energy drinks. It earned Shoshanna the $50,000 top prize nationally in the 2010 Robert Wood Johnson Foundation Young Epidemiology Scholars (YES) Competition.

Shoshanna hopes to inspire educators to include this information in their health curriculum and hopes to convince lawmakers to ban the sale of energy drinks to people under the age of 18.

While Shoshanna’s work is inspiring, her story of dedicating her life to neuroscience is equally inspiring. At the age of 13, she was diagnosed with a brain tumor. As she was treated at Children’s Hospital of Philadelphia (CHOP), she was inspired by the world-class physicians who helped her regain her health. Shoshanna now serves as a CHOP spokesperson.

“A brain tumor at 13 left me committed to becoming an amazing neurosurgeon,” Shoshanna says of her experience. “Passionate about neurology, public health, and children’s issues, I’m fully recovered with an extra dose of compassion for others.”

Richard Blanco is an American poet, author, and ci

We are thrilled to introduce the new Da Vinci Scie

Spring Break School's Out Science Camps are right around the corner! Kids get a crash course in healthcare with Da Vinci, M.D. camp, travel to a far-off galaxy in Use the Force camp, and take on the egg drop challenge in Spring Fling camp. bit.ly/3feQtUc ...

Have you ever made a Heliball that you can pilot using just your hand? Well, in the Invention Project science club, you can do this and SO MUCH MORE! Registration closes April 2. bit.ly/3cmet5H ...

Check out this awesome virtual event from the LGBTQ Business Council, featuring Hazel Grace Roses, our Facilities Technician. Hazel will share her story and speak with other panelists about navigating life through the LGBTQ workplace and beyond. We are a proud supporter of the LGBTQ Business Council, and are committed to being a safe and inclusive organization for all staff, volunteers, and visitors. #PrideinSTEAMStr8 Talk: Life In The Real World is happening on Thursday, March 25th from 12:00 - 1:30 PM! This Str8 Talk Panel is designed for curious minds and those willing to enhance their allyship. Str8 Talk participants will have the opportunity to learn more about navigating life through the LGBTQ workplace and beyond as each panelist represents their identity, shares their experience and personal stories.Register for free below!bit.ly/3lh9SEK ...

We are very proud of our Chief Administrative Officer, Maureen Michael, for being named one of Lehigh Valley Business's 2021 Women of Influence. Maureen has been an instrumental leader at Da Vinci Science Center and inspires everyone around her. Congratulations Maureen! bit.ly/3qEfPww ...

“Sharing stories of persistence is really important to girls interested in science.” -Karen Knecht, Da Vinci Science Center Director of Education. Last night, Karen participated in a virtual panel discussion as part of PBS39's event, The Future is Female: Women, Space, & NASA. She spoke about our Women in Science & Engineering Initiative and the importance of getting more girls interested in STEM careers. Check out the full program below. #womenshistorymonth ...

The Future Is Female

This is "The Future Is Female" by PBS39 on Vimeo, the home for high quality videos and the people who love them.