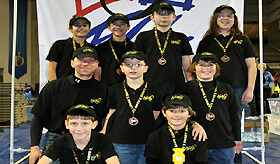 Team Igutech’s robot, built entirely from Lego pieces, uses a programmable Lego Mindstorms unit as its core. This year’s competition required the entry to run autonomously and fulfill pre-defined tasks within two minutes and thirty seconds. These tasks included picking up a Lego truck and pulling it back to the base and delivering a handful of Lego grocery items to a small table on the field.

In addition to robot design and programming, FIRST Lego League judges evaluate each team’s work on a research project that is not related to Lego robotics. This year’s research theme is food Contamination. The IguTechs researched contamination caused by poor hand-washing habits in schools, restaurants, and other food-service industry locations. After determining that many people do not wash hands after using the bathroom, the Igutechs developed a “CleanBox,” an integrated hand washing station that rewards the user.

Team Igutech helped the Da Vinci Science Center open its Summer of Manufacturing in June 2011 when one of its robots cut the ceremonial ribbon for the Center’s presentation of the How People Make Things exhibit.