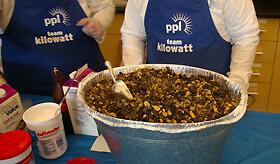 Ice Cream Wars 5.0 Judges’ Awards – given to recognize team spirit, sportsmanship, and camaraderie – were as follows:

Ice Cream Wars premiered in Jan. 2009 as an adaptation of the finale of its popular SuperCoolness visitor shows. Its original purpose was to help fill a second winter holiday weekend of visitor activities. Its popularity exceeded all expectations, encouraging the Center to hold the contest annually and on a non-holiday weekend.

The first contests featured teams of Da Vinci Science Center staff members. Teams from partner companies were added to the mix to increase excitement. More corporate partners became interested in competing, and the all-corporate team format was adopted for Ice Cream Wars 4.0 in 2012, giving Da Vinci Science Center partners an opportunity to enjoy the type of experiences they help bring to life each day.