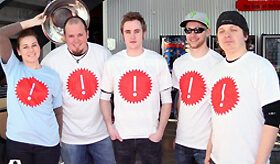 The team from 401! Creative earned the most votes with its recipe, Strawberry Cookie Crunch. LSI Corporation finished second with its recipe, Super Chocolate Pretzel. WFMZ 69 News placed third with Beach Party Float. Rounding out the field were The Morning Call with Peppermint Stick Swirl and PPL Corporation with Chocolate Heat.

The Da Vinci Science Center adopted a new competition format in which all Ice Cream Wars 4.0 teams represented companies in eastern Pennsylvania who have partnered with the nonprofit organization. Each team was assigned a mentor from the Center’s staff. While companies have been participating in Ice Cream Wars since the event’s second year, all of the previous three contests were won handily by Da Vinci Science Center teams.