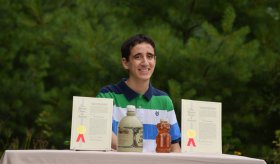 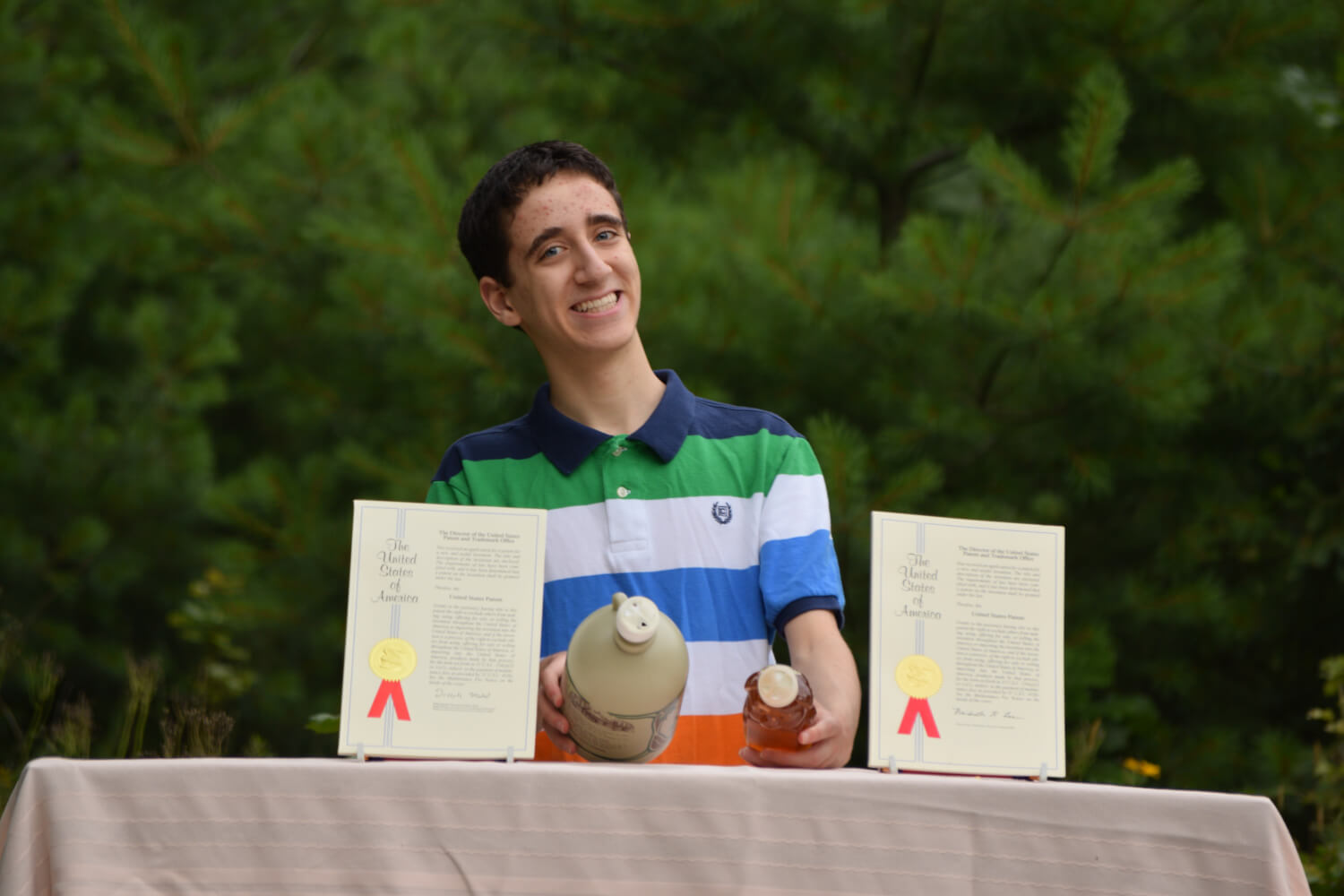 The Da Vinci Science Center announced today that its Inventors Lab Program has opened registration for the 2017-2018 school year. This announcement comes after 2012 program showcase winner, Ambrose Cavalier of Saylorsburg, Pa., earned his second U.S. patent at the age of 14 for a modification to his invention of an adjustable dispensing bottle cap – a third patent for the program in total.

One of the most unique programs of its kind in the United States, the intensive eight-month course introduces students in Grades 5-8 to the invention process through hands-on activities and presentations by professional scientists and engineers. Students develop their own inventions between monthly Saturday morning sessions and present them before a panel of experts during the Inventors Lab Showcase in April. One student is selected each year for a chance to apply for a patent with donated legal assistance. To obtain a U.S. patent, an invention must be unique, novel, and unknown to one skilled in the art.

Nearly 200 students have developed ideas since the program began in the fall of 2007, and six showcase winners have submitted provisional patents – Ambrose being one of them. Ambrose developed his idea at the age of nine. The adjustable cap (Pat. No. 9,371,164) allows users to dispense liquids of varying degrees of thickness, such as maple syrup, without the mess of spills. Ambrose applied for a second patent at the suggestion of the U.S. Patent Office, which advised that multiple design aspects of his invention should be split. The second patent (Pat. No. US 9,676,529), was awarded on June 13, 2017.

“We are incredibly proud of Ambrose for earning not one, but now two, full U.S. Patents on his invention through the Inventors Lab Program,” said Kate Heflin, Da Vinci Science Center’s Museum Education and Inventors Lab Program Coordinator. “Obtaining a U.S. Patent is a monumental achievement at any age, but having a student from our program earn multiple patents is extraordinary.”

Ambrose’s applications were made possible in part with support from Inventors Lab Program creator Frank K. Schweighardt, Ph.D., a retired chemist, inventor, and current Da Vinci Science Center Board of Trustees member, and patent services donated by Damon Neagle and Brian Reddy of DESIGN IP in Allentown, Pa. The first Inventors Lab showcase winner, William Schopf of Whitehall, Pa., was 10 years old when he created a wind-powered generator for a vehicle in 2008. Schopf was also 14 years old at the time he was awarded the program’s first full patent in September 2012.

Only 24 spots are available for the 2017-2018 Inventors Lab Program. Registration is open exclusively to members through July 23, 2017. Interested members are asked to complete a pre-registration form at davincisciencecenter.org/inventors/pre-reg-form. If space remains available as of July 24, then registration will be opened to the general public.

About The Da Vinci Science Center: Open for ExSCIting Possibilities

Birthday parties are back! We're so excited to off

There are only a few spots left in Watershed Wonde

We've had such a good time so far today during Sci

We were so happy to have Terry Sullivan, Chief of

The day is here! Join us until 9 p.m. today for Sc

Is your K-2nd grader an animal lover? If so, we've

Transform your ideas into great solutions during o

We're looking back on some of our favorite memorie

Take a trip around the world with us during Food S

Calling all middle school girls with a passion for

Science Under the Stars is just one week away! Are

A school holiday is coming up! If your kids have o

Margaret Luthar is another one of our distinguishe

Have you heard? BODY WORLDS RX is coming to Da Vin

Science Under the Stars is just 2 weeks away! Join

Birthday parties are back! We're so excited to offer 3 new party packages that will give your child the best birthday ever! You can learn more and request a reservation at bit.ly/3dxdwec. ... See MoreSee Less

There are only a few spots left in Watershed Wonders camp on Oct. 5. If your kids have off from school for Yom Kippur, enroll them in camp and they'll spend the day with us, exploring all of the creatures in our Da Vinci Pond! Learn more at bit.ly/3UaD5T1. ... See MoreSee Less

We had the best time on Saturday at our Science Under the Stars event! We want to thank all of the volunteers that helped to make this day a success, including the awesome teams from Kyber Base Garrison Carida Mav oya'la Clan The Galactic Academy Takodana School Pennsylvania 501st Legion First State Garrison Lehigh Valley Amateur Astronomical Society ... See MoreSee Less

Critter Coders Science Club introduces kids to the art of coding in the cutest way! Students in grades K-2 will program Coding Critter™ robots and explore a variety of games and challenges in order to problem-solve, set goals, and work together! Learn more and register at bit.ly/3B63mcn. ... See MoreSee Less

We've had such a good time so far today during Science Under the Stars, and the fun is just getting started! We're open until 9 p.m. today, and you DEFINITELY don't want to miss viewing the night sky with telescopes once the Sun sets. $5 admission all day long. ... See MoreSee Less

We were so happy to have Terry Sullivan, Chief of Staff for astronaut and philanthropist Jared Isaacman, here to help announce the Isaacman Next Generation Science Institute. The Institute’s launch is designed to support the adoption of new science, environment and ecology, technology, and engineering standards in Pennsylvania, creating an opportunity for schools to update their vision for science education. We cannot thank Jared and his wife Monica enough for their support. Learn more at bit.ly/3BsQwVX. ... See MoreSee Less

The day is here! Join us for Science Under the Stars until 9 p.m. today. We’ve got telescopes to view the Sun during the day and the stars at night. Plus, some of your favorite characters from a galaxy far, far away are hanging out with us until 6 p.m. Admission is only $5 per person! ... See MoreSee Less

Is your K-2nd grader an animal lover? If so, we've got the science club for you! In Animal Adventurers club, we'll venture through the animal kingdom and explore the diversity and adaptability of the furry, feathered, and scaly creatures we find in our own backyard and beyond. Learn more and register at bit.ly/3B63mcn. ... See MoreSee Less

Transform your ideas into great solutions during our Young Inventors: Idea Lab Science Club for grades 5-9. Learn advanced building and making skills, and so much more, as you turn your idea into a prototype. Learn more and register at bit.ly/3B63mcn. ... See MoreSee Less

Students build and program LEGO® robots during our FIRST® LEGO® League Science Clubs. Two clubs are available, one for grades 2-4, and one for grades 5-8. First sessions are on Oct. 2. Learn more and register at bit.ly/3B63mcn. ... See MoreSee Less

Innovate like Leonardo da Vinci and combine traditional art materials with science and engineering during our Art of Science after school club for grades 3-5. We'll experiment with the physics of light, tinker with circuitry, and express ourselves through artmaking! First meeting is Sept. 28. Learn more at bit.ly/3B63mcn. ... See MoreSee Less

Take a trip around the world with us during Food Science Explorers camp on Oct. 10 (Indigenous People's Day). Drop the kids off with us for a day of discovery as we try out different kinds of cooking techniques used across the globe to create unique dishes. Register at bit.ly/3Bwi2D2. ... See MoreSee Less

Calling all middle school girls with a passion for STEAM (science, technology, engineering, art, and math)! This after school Science Club is made just for you! Connect with like-minded peers and learn to think like a scientist as we explore chemistry, physics, biology, and more. First meeting is Sept. 28. Learn more at bit.ly/3B63mcn. ... See MoreSee Less

Science Under the Stars is just one week away! Are you as excited as we are?! Sky viewings with telescopes, create your own stomp rockets, experience virtual reality, and meet some characters from a galaxy far, far away. All for only $5 per person! Learn more at ow.ly/8Gbh50KEV9t. ... See MoreSee Less

A school holiday is coming up! If your kids have off on Oct. 5 for Yom Kippur, we've got you covered with Watershed Wonders camp. We'll dive into learning what makes our watershed so special and introduce kids to all of the creatures in our Da Vinci Pond. Learn more and register at bit.ly/3BnuGUT. ... See MoreSee Less

Margaret Luthar is another one of our distinguished panelists for our Women in Science & Engineering (WISE) Forum on Nov. 15. Margaret is a Broadcast & Recording Technician for NPR and a Freelance Mastering Engineer. Learn more about Margaret and the WISE Forum at bit.ly/3JwIoaf. ... See MoreSee Less

Science Under the Stars is just 2 weeks away! Join us on Sept. 17 for just $5 per person all day and night long. We'll have telescopes for day and night sky viewings, Use the Force Live Science Shows, tons of hands-on activities, and even some special guests from a galaxy far, far away. Learn more at bit.ly/3AD8uWk. ... See MoreSee Less

Jack-O-Lantern Lane is back beginning Sept. 28 with brand new hands-on experiences for the whole family! Step right into the heart of Halloween with hand-carved jack-o-lanterns, not-so-spooky houses, a special pre-k experience, and so much more! More details at bit.ly/3KNZIbL. ... See MoreSee Less