Dinosaurs are amazing extinct creatures that lived during the Mesozoic Era (from 252 to 66 million years ago).  Their fossils have been found on every continent.  Over their long history, many different species evolved in all different sizes and shapes.

Paleontology is the field of science that studies the history of life on Earth that is preserved in fossils in rocks.  Sometimes paleontologists can find hard parts like teeth and bones, and other times, the only evidence left behind may be footprints, or impressions of a shell, leaf, or body.  Some fossils that are hundreds of millions of years old look very much like organisms that are alive today, like horseshoe crabs, cockroaches, and ginkgo trees.  Others, like fossilized dinosaurs, allow us to learn about creatures that became extinct long before there were any humans on Earth. 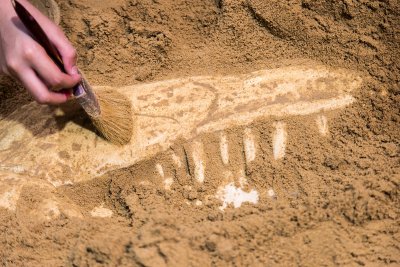 Learn how scientists revise their understandings of past life on Earth in light of new evidence in this read-aloud of the book, Boy, Were We Wrong About Dinosaurs (by Kathleen V. Kudlinski and S.D. Schindler, 2008) Watch Here

I Am a Paleontologist (by They Might Be Giants, Danny Weinkauf) Watch Here
Music Video Cartoons (by Howdytoons) Watch Here

Imagine a new kind of dinosaur and draw it:

Show with your body how these animals moved:

Imagine you are a T. rex
Your arms are really short! You can’t pick up your food to bite it. You’ll have to stomp on your food with your feet and rip it with your big teeth.

Imagine you are a Triceratops
You have horns on your head! You can use those to protect yourself from being eaten by other dinosaurs.

Imagine you are an Apatosaurus
Your neck is SOOOO long! You can reach up high in the trees for nice, juicy, green leaves to eat.

Help us to bring science to life!

We’ll share some of our favorites so that we can all learn from each other! Plus, check back on this page where we’ll highlight the submissions we receive so you can see what others are doing!

Here are just a few ideas for photos or videos you can share:

Walk among life-size, realistic, animatronic dinosaurs!  Be sure to stay up-to-date on what’s coming next by signing up for our email newsletter.

As we celebrate the legacy of Martin Luther King,

During our Creative Contraptions Science Club, students use the engineering design process to build, test, revise, and improve their contraptions that accomplish simple tasks in the zaniest ways possible. bit.ly/3zWFKGe ... See MoreSee Less

As we celebrate the legacy of Martin Luther King, Jr. this holiday weekend, we would like to invite our visitors to participate in our Essential Family Donations Drive. Please consider helping our community members during this difficult time. Many families are struggling to secure basic necessities. Donations are being accepted at our Welcome Center. You can find a list of essential items at bit.ly/33ide5O. ... See MoreSee Less

Middle school girls interested in science, technology, engineering, art, and math (STEAM) will work together to learn new skills and discover how they can change the world during STEAM Girls Science Club. bit.ly/3zWFKGe ... See MoreSee Less

No school on Jan. 17 (MLK Jr. Day)? Kids in grades K-5 can come chill with us for a day of super COOL camp activities! During Sub-Zero Science camp, we'll explore with dry ice and other frozen substances. Learn more and register at bit.ly/3JuieEX. ... See MoreSee Less

Calling all local artists! We're partnering with the Cultural Coalition of Allentown to commission a new semi-permanent mural at the site of the soon-to-be Da Vinci Science Center at PPL Pavilion in downtown Allentown. Check out the details in the post below! ... See MoreSee Less
View on Facebook
· Share

Calling all middle school girls with a passion for science, technology, engineering, art, and math! STEAM Girls Science Club is for you! Explore the fields of chemistry, physics, biology, and more as we collaborate to creatively solve real-world problem while learning to think like scientists and engineers. Learn more and register at bit.ly/3EBoSW7. ... See MoreSee Less

Tinker with a real Mack Truck dashboard straight off the production line during STEAM Club: Manufacturing Your Future, an after school science club for grades 3-5. Learn more and register at bit.ly/3EBoSW7. ... See MoreSee Less

We’re having TONS of frozen fun all this week, with live Frozen Science Shows every day! ... See MoreSee Less

Lehigh Valley Health Network Vice Chair of the Dept. of Pediatrics Dr. Debra Carter published an op-ed in the Morning Call highlighting the importance of masks and vaccines in the fight against COVID-19."Masks work. Both science and logic back that up. Fewer droplets in the air mean less opportunity for COVID-19 and other viruses to jump from person to person. We’ve been covering our coughs and sneezes for years. Why? Because blocking a cough or sneeze limits a virus’s ability to travel, and it’s the polite thing to do."Science will get us through these difficult times. We are committed to keeping everyone safe, which is why we require masks for all staff and visitors ages 3 and up and we are proud to say that our staff has a 100% vaccination rate. ... See MoreSee Less

Your View by LVHN pediatrician: A record number of children are getting COVID-19. So now is not the time to say goodbye to masks

A recent week at Lehigh Valley Health Network saw the highest number of 6- to 12-year-olds test positive for COVID-19 ever — more than 350.
View on Facebook
· Share

You've GOT to check out our carpet skating rink, here for a limited time - now through Dec. 31! Plus, we've got tons of other special frozen science activities this week only. Learn more at bit.ly/32dQK5q. ... See MoreSee Less

Wishing you and your family a very happy holiday season! We will be closing at 3 p.m. today (Dec. 24) and will reopen on Sunday, Dec. 26 at 12 p.m. with special Frozen Science activities all next week! Learn more at bit.ly/3q5KQve. ... See MoreSee Less

Check out our latest STEAM in Action blog featuring civil engineer, Adam Smith. Adam is a Senior Project Manager at Barry Isett & Associates, where he is part of the team working on the new Da Vinci Science Center at PPL Pavilion. bit.ly/3ebxec6 ... See MoreSee Less

Kids in grades K-5 can explore some sweet food science with us during Science of Sweets day camps on Dec. 27-31. Join us for one or all five days! Learn more and register at bit.ly/3DERm0A. ... See MoreSee Less

You've seen an ice skating rink, but you've GOT to check out our carpet skating rink! From Dec. 26-31, we'll have special winter activities, including carpet skating and a Frozen Live Science Show. All included with general admission. Reserve your tickets today at bit.ly/3ICqi5S. ... See MoreSee Less

Memberships to Da Vinci Science Center are gifts that keep on giving all year round! Memberships include unlimited Science Center access for a full year, plus access to over 350 other science centers across the country bit.ly/3GnI6jr. ... See MoreSee Less

Wishing you all a very happy Thanksgiving. We will be closed today and will reopen tomorrow. ... See MoreSee Less

Drop your kids off with us on Black Friday as you enjoy a day of shopping! Kids in grades K-5 can register for Grossology School's Out Science Camp where we'll explore some of the messiest, ickiest experiments we could think of! Learn more at bit.ly/3CEkVyP. ... See MoreSee Less