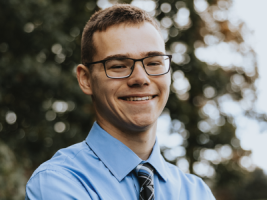 Christian Piper began an interest in STEAM as a young child building paper airplanes and playing with the robotic dinosaur at the Da Vinci Science Center. He also experienced a program with a surgery robot at the science center which opened his eyes to what robots are capable of. In middle school he taught himself basic electronics and went on mastering skills in 3D printing. This year he is the lead programmer for his Robotics Team. Christian plans to pursue a degree in Robotic Engineering with the ultimate goal of owning his own business. Along the way, he wants to continue mentoring students who share his passion. According to Christian, “STEAM isn’t just a word, it’s a lifestyle. Ever since I was ‘bitten’ by the bug as a young child, I’ve loved STEAM.”

In addition to the Robotics Team, Christian is a Teen Counselor, President of the Student Council, and a member of the National Honor Society. He is also a tutor, Little League assistant coach, and a volunteer counselor at Camp Invention.

Christian’s Award is sponsored by

We're excited to announce our next traveling exhib

We're excited to announce our next traveling exhibition coming in December - BODY WORLDS RX! Explore the human body from the inside out. From organs, to muscles, to the nervous system, to skeletal structures, the exhibition showcases over 30 real human specimens preserved through Plastination. Tickets on sale Oct. 16. Learn more at bit.ly/3PwcQ5X. ... See MoreSee Less

Bringing Science to Life and Lives to Science today at the The Salvation Army, Allentown Corps back-to-school street fair! Thank you to the Salvation Army and everyone who helped make this an outstanding community event! ... See MoreSee Less