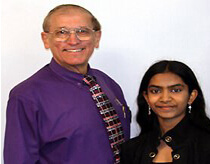 The winner of the 2014 Inventors Lab showcase, Vidhyasai Annem, formerly of Allentown, has been granted a U.S. Patent.

Vidhya participated in the Science Center’s Inventors Lab program at the age of 12 in the 2013-14 school year and invented a multiple-section hair brush that contains a series of rare earth magnets with the South Pole facing the hair.

Do you have a young inventor that wants to make his or her ideas a reality? Young Inventors lets students explore the invention process with professional scientists and engineers. Registration is now open.

Vidhya’s brush collects stray hair after spraying a special magnetic fluid containing micro fine iron on the user’s hair.  When the hair is captured on the brush, the magnets (in one piece) are moved to have the North Pole face the hair, and the hair is released into a wastebasket. The fluid is harmless and can remain in the hair.

Vidhya developed her patent idea to serve as a creative solution to an everyday problem. Her mother wanted her to stop dropping her hair on the floor of the bathroom after brushing.

Vidhya, who formerly attended Springhouse Middle School in Allentown, Pa., will be a senior at the Liberal Arts and Science Academy in Austin, Texas. Earlier this year, she was part of a team that won a bronze medal in the International Genetically Engineered Machine competition.  Her team developed an HIV-1 detection kit for pediatric use in low income areas.

For the past two and a half years, Vidhya has worked with James R. McDaniel, Esq., a patent attorney who donated his time and services to help her file the necessary applications, and Dr. Frank Schweighardt, who assisted with the testing protocol.

More than 240 students have developed ideas in the program, and now, students have been awarded six U.S. Patents and two have additional patent ideas under review. Vidhya is the fifth student to have earned a full patent.